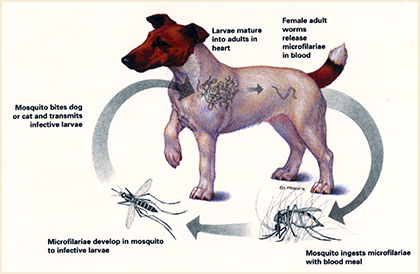 Heartworms in dogs are easy to prevent, but difficult and costly to cure. We asked Sheldon Rubin, 2007-2010 president of the American Heartworm Society, to separate facts from the myths about heartworm infestations in dogs.

Heartworm disease has not only spread throughout the United States, but it’s also now found in areas where veterinarians used to say “Oh, we don’t have heartworm disease.” Areas like Oregon, California, Arizona, and desert areas -- where irrigation and building are allowing mosquitoes to survive. And if you have mosquitoes and you have animals, you’re going to have heartworms. It’s just that simple.

It takes about seven months, once a dog is bitten by an infected mosquito, for the larvae to mature into adult heartworms. They then lodge in the heart, lungs, and surrounding blood vessels and begin reproducing. Adult worms can grow up to 12 inches in length, can live 5-7 years, and a dog can have as many as 250 worms in its system.

Q: Can people get heartworms from their dogs?
A: It can only be passed on by mosquitoes. It’s a specific parasite that only affects dogs and cats and ferrets and other mammals. In rare cases, heartworms have infected people, but it does not complete its life cycle. The heartworm will migrate to the lung and cause a round lesion that looks like a tumor. But these are very rare cases.

Q: If one of my dogs has heartworms, can he give it to my other dogs?
A: No. Again, the only way heartworms are transmitted is through the bite of an infected mosquito. And even if an uninfected mosquito bit your infected dog, and then bit your uninfected dog the same night, he wouldn’t transmit the parasite from one dog to the other. That’s because when a mosquito bites an infected animal, the heartworm needs to undergo an incubation period in the mosquito before the mosquito can infect other animals.

Q: Is it OK to adopt a dog with heartworms?
A: It’s a very common problem in animal shelters today, and public shelters rarely have the money to treat heartworm disease. It’s perfectly acceptable to adopt a dog with heartworms, but you have to be dedicated to having the disease treated appropriately, because it’s a horrible disease that can lead to a dog’s death if left untreated.

Q: How can I prevent my dogs from getting heartworms?
A: For less than the cost of going to Starbucks for a weekly coffee, you can prevent heartworm disease in your dog. There are monthly pills, monthly topicals that you put on the skin, and there’s also a six-month injectable product. The damage that’s done to the dog and the cost of the treatment is way more than the cost to prevent heartworm disease. A year’s supply of heartworm preventative will cost about $35 to $80, depending on a dog’s weight.

Q: What are the symptoms of heartworm infestations in dogs?
A: Initially, there are no symptoms. But as more and more worms crowd the heart and lungs, most dogs will develop a cough. As it progresses, they won’t be able toexercise as much as before; they’ll become winded easier. With severe heartworm disease, we can hear abnormal lung sounds, dogs can pass out from the loss of blood to the brain, and they can retain fluids. Eventually, most dogs will die if the worms are not treated.

Q: Once my dog has heartworms, what’s the treatment? How much will it cost?
A: The drug that you treat with is called Immiticide. It’s an injectable, arsenic-based product. The dog is given two or three injections that will kill the adult heartworms in the blood vessels of the heart.

The safest way to treat heartworms includes an extensive pre-treatment workup, including X-rays, blood work, and all the tests needed to establish how serious the infection is. Then the dog is given the injections. With all the prep work, it can run up to $1,000. But just the treatment can be done for about $300 in some areas.

Q: Why do I have to keep my dog quiet during the several months he’s being treated for heartworms?
A: After treatment, the worms begin to die. And as they die, they break up into pieces, which can cause a blockage of the pulmonary vessels and cause death. That’s why dogs have to be kept quiet during the treatment and then for several months afterward. Studies have shown that most of the dogs that die after heartworm treatment do so because the owners let them exercise. It’s not due to the drug itself.

Q: If my dog is diagnosed with heartworms, can I just give him his monthly preventative instead of having him go through treatment? Won’t that kill his heartworms?
A: Studies have shown that if you use ivermectin, the common preventative, on a monthly basis in a dog with heartworm disease, after about two years you’ll kill off most of the dog’s young heartworms. The problem is, in the meantime, all of those heartworms are doing permanent damage to the heart and blood vessels. But if there’s no way someone can afford the actual treatment, at least using the preventative on a monthly basis could be a lesser alternative.

Q: Can I skip giving my dog his preventative during colder months, when there aren’t any mosquitoes?
A: The American Heartworm Society recommends year-round heartworm prevention. One reason is, there’s already a serious problem with people forgetting to give their dogs the heartworm preventatives. It’s a universal problem. Now if you use it year-round, and you miss a month, your dog will probably still be protected. But if you miss more than one or two months your dog could become infected.

The other reason not to stop is that many of the preventatives today also include an intestinal parasite control for roundworms, whipworms, or tapeworms. You want your dog to be protected against those at all times.

Q: If I don’t treat my dog with heartworms, will he “outgrow” his heartworms?
A: No. He stands a good chance of dying from the disease.

Q: I’ve heard the treatment for heartworms can be dangerous. Are there any newer, safer alternatives?
A: We used to use plain arsenic to treat it, which had many side effects. What we use now is a safer product with fewer side effects. It’s a safe product if used correctly.

Q: If my dog gets heartworms, and is treated for them, can he get them again?
A: Yes, he can get them again. That’s why prevention is so important.

Update Personal Details
Your ticket for